Gambling on War: Confidence, Fear and the Tragedy of the First World War

Over the past two decades, my research efforts have been focused on the impact of war and economic history, with special attention to the American Civil War in the First World. My most recent effort is a book titled Gambling on War: Confidence, Fear, and the Tragedy of The First World War. The book is a cliometrics narrative of the military and economic impact of the war from its outbreak in 1914 through the last of the interstate wars following the Treaty of Versailles. Reactions to the Book have been highly favorable:

World War I became a tragedy when victory became an end in itself rather than a means of achieving some pre-war objective. In his lucid and insightful Gambling on War, Roger L. Ransom draws on history and economics to explain why that happened, why World War I upended the world's institutions, and why its tragic effects persist even today.

Philip Hoffman, author of Why Did Europe Conquer the World?

The First World War remains with us. Ransom, an economic historian, places it within an age of extremes that ran from Bismarck to Clemenceau. The war was resolved with no rivalries. Shocks. It angers. It is a must-read. It led to no new normalcy. The book jars the reader into that reality. It shocks. It angers. It is a must-read.
Holger H. Herwig, author of The First World War: Germany and Austria-Hungary 1914-1918

Economists think of people as rational, but this is belied by experience. From that perspective, economic historian Roger L. Ransom shows persuasively how over-confidence, fear, and reckless gambles make sense of a sequence of bad decisions that led to the First World War and to catastrophic outcomes that nobody planned for.

The Confederate States of America: What Might Have Been

W.W. Norton, 2005
"What If" is every historian's secret question, and "What if the South had won the Civil War?" is a question that every Buff ponders at some time or another. After years of teaching about the Civil War, I decided in 2004 that it was time for me to write my counterfactual history of a world where the South gained its independence. I concluded it would not be a better world.

The Political Economy of Slavery, Emancipation, and the American Civil War
Cambridge University Press, 1989
My first teaching assignment in the History Department at UCR was an upper-division course on the American Civil War. The notes I made for that first year of teaching provided the outline for Conflict and Compromise. I still use the ideas I developed writing this book when I teach or lecture on the Civil War.
More on Conflict and Compromise.

One Kind of Freedom:

The Economic Consequences of Emancipation
Coauthored with Richard Sutch
Cambridge University Press, 1977; Second Edition, 2001
In the summer of 1969, Richard Sutch and I circulated a paper entitled "The Rise of Sharecropping in the American South -- 1868-1900." That paper was the genesis of our book One Kind of Freedom, which was published eight years later. Over the next two decades, OKOF became one of the most influential works in Southern History. A revised edition of the book was published in 2001. 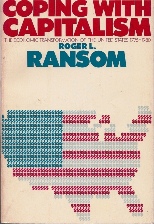 The Economic Transformation of the United States
Prentice-Hall, 1981

For more than two decades, I taught courses dealing with the economic growth and development of the United States. Much has happened since this book was published in 1981, but the challenge of "coping" with our economic system has, if anything, increased over the years. 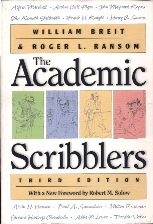 Coauthored with William Breit
Holt, Rinehart & Winston, 1971;
Revised Edition, Dryden Press, 1981
Third Edition, Princeton University Press, 1998
Chinese Translation, Beijing, China, 2004
Bill Breit and I started writing Academic Scribblers while we were both faculty members at the University of Virginia in the late 1960s. The title was taken from John Maynard Keynes' comment that "The ideas of economists and political Philosophers, both whey they are right and when they are wrong, are more powerful than is commonly believed." The book looks at the ideas and lives of 12 economists who shaped the "Keynesian Revolution" in the United States. The third edition of the book was translated into Chinese in 2004.

Explorations in the New Economic History

When I arrived at the University of Washington in the fall of 1959, the New Economic History was still in its infancy. During my four years in Seattle, I came to appreciate the talents of one of the unique men I have ever met: Douglass North. He got me hooked on economic history, and he remains my "role model" to the present day. This Festschrift was put together by Richard Sutch, Gary Walton, and myself and presented to Doug on the occasion of his 60th Birthday.